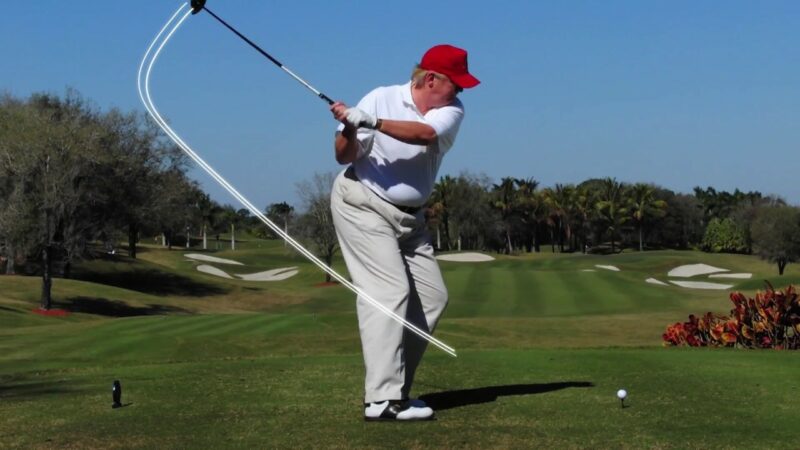 Even more incredibly, the former president was able to claim victory despite completely skipping the tourney’s first day, having been in North Carolina for Lynette “Diamond” Hardaway’s memorial service.

Calling the win “a great honor” in a Truth Social post, Trump crowed:

As the event’s other competitors teed off at Trump International Golf Club on Saturday, the club’s namesake was nearly 700 miles away in Fayetteville, North Carolina. Trump was recorded onstage at Fayetteville’s Crown Theater, eulogizing Diamond, the late pro-MAGA influencer who died suddenly at 51 a fortnight ago. “Through the tears and the grief, let us celebrate this incredible life,” he said.

The next morning, insiders told the Daily Mail, the former president rolled up to the green at West Palm Beach with a five-point lead over his closest competition. The outlet reported that Trump boasted of having played an excellent round earlier in the week, and that that game would count as his first day’s score.

“In addition to being an excellent golfer, President Trump is an even better human being. He was honored to be in North Carolina on Saturday to celebrate the life of Diamond, a remarkable individual whose legacy will continue to live on.”

Trump has long maintained that he has never once, ever, cheated at the game of golf—and that he’s come by his many, many club championship titles honestly. In 2019, however, sportswriter Rick Reilly disputed the then-president’s claims, telling Vox, “This guy cheats like a mafia accountant.”

“Trump’s going around telling people he has won 20 [club championships],” Reilly said elsewhere in the interview. “But that’s 100 percent a lie. I actually played with him once, and he told me how he does it: Whenever he opens a new golf course, because he owns 14 and operates another five, he plays the first club champion by himself and declares that the club championship and puts his name on the wall.”