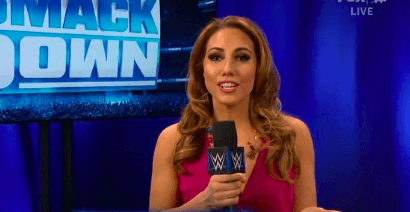 On this week’s episode of Friday Night SmackDown, a new interviewer debuted on TV. The interviewer was involved with the Shorty G and Sheamus segment (which soon turned ugly).

The interviewer is an Emmy-nominated traffic reporter for FOX5 Alyse Zwick. On WWE TV, she goes by “Alyse Ashton”, having already served as the host for WWE Network’s This Week in WWE, WWE Experience as well as Bottom Line.

Ashton/Zwick is also an actress and an arena host for National Hockey League’s New York Islanders.