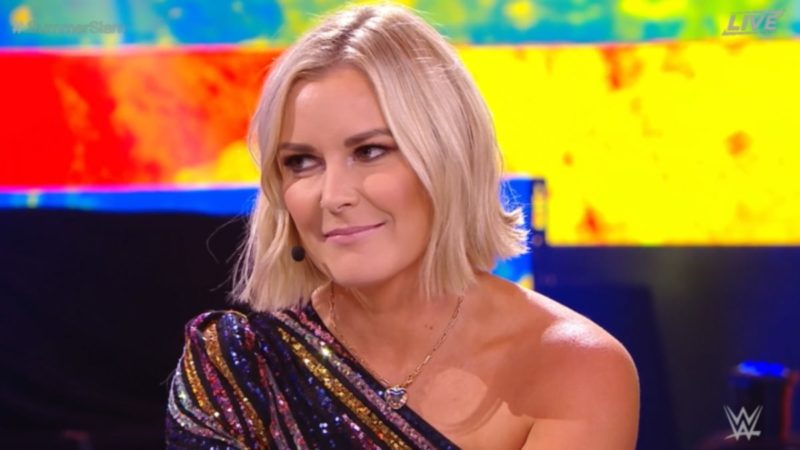 Renee Young left WWE right after SummerSlam after working with the company as a special contributor for eight long years.

Ever since her departure, there have been speculations regarding her next step. The most popular belief is that Young will join her husband Jon Moxley on AEW. However, fans who are waiting for that to happen, might have to wait a bit longer.

Also thanks to all of the cool dudes who hung out last night and sent my ass home with a gnarly hangover. Love ya! 😘

In a recent interview with Sports Media Podcast, Young revealed details about her WWE non-compete clause as well as about making the jump to AEW.

Renee Young commented that going to AEW certainly makes sense, given how she has almost a decade’s worth of wrestling knowledge. But she will have to wait for her WWE non-compete clause to come around one year.

“I’ve accumulated a mass of wrestling knowledge over the last eight years that it would be kind of dumb to just throw that away. It seems like doing that would be kind of a waste of the last almost ten years. I don’t even know if I’m legally allowed to say how long my non-compete clause is, but it’s in and around [1 year]. I don’t know – I’m just a girl that likes to talk about wrestling. I’m not into the legal jargon.” H/T Wrestling Inc

Her decision to leave was respected by WWE top management, Young said earlier while talking about backstage reaction to her exit.

On what AEW role would be a good fit

Young also discussed what kind of work she would like to do if she goes over to AEW. She revealed that she had pitched a role similar to that of UFC’s Megan Olivi to the head writers of SmackDown. That is what she would like to pursue in AEW as well. She was excited to be in commentary, but that was never her big dream as such.

“I think if that was something that ever were to come up [working with AEW], I don’t think that putting me on commentary is the right move. Even when I started doing commentary, I was stoked to do that but it was never a goal of mine. My dreams are not dashed by not being on commentary. I tried to pitch to the head writers of SmackDown to use me like UFC uses Megan Olivi, and she feels like an important part of the broadcast. I think that roaming reporter type of role would be awesome with any wrestling company.”

Right now, Young is taking some time off to unwind, relax, and spend time with her husband, as Jon Moxley revealed in a recent interview.