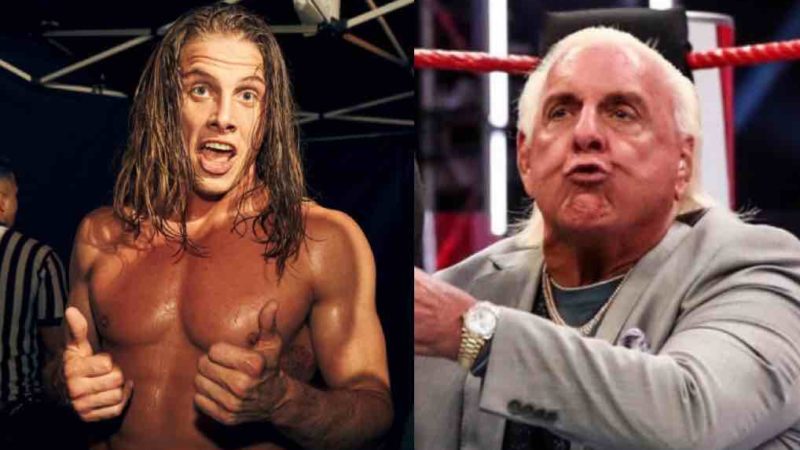 Ric Flair is actually a huge fan of Matt Riddle and does not have heat with him like some legends, in particular Goldberg and Brock Lesnar. Ric Flair just revealed how Stephanie McMahon ‘changed’ WWE forever.

Riddle revealed, “A lot of people think that I have heat with the legends, but the majority of the legends like me. I see Ric Flair all the time. He has been around [more often] now that he has this little thing with Lacey, and he is one of the greats. He always give some tips and advice. Booker T always gives me advice to put my shoes on, he doesn’t like seeing me wrestle with bare foot. He says, ‘Go and get boots man!’

Carlito was there the other day, he is a nice guy. Christian, he gave me some tips, he said, ‘Keep being a stallion’ and I say, ‘You too.’ Edge is there all the time now, he is pretty legendary. He’s cool. But do you know who was the best legend that was there? Gillberg! That guy is one of the nicest people that I’ve ever met. He wrestled, he’s been there, he’s been up, he’s been down. He was a pleasure, he gave great advice to everybody in the locker room and told stories about the past, so he was a true treat.”

Carlito just made bold WWE drug test remarks. Riddle said about The Undertaker calling the WWE product and wrestlers soft, “I would say to the Undertaker and everybody else, times have changed, the human race and everyone is evolving. And yes we don’t carry knives and guns to work because we have metal detectors to keep us safe, so people don’t do that. We have a wellness policy where we are all getting tested regularly so we are safe and in our right state of mind. I love my job. I am a former professional UFC fighter that broke people’s jaws on a steel cage. [That’s] something that wasn’t around when he was a young man, and I bet if it was he still wouldn’t step up because it takes a different breed. He shouldn’t say certain things about the upcoming roster because we are real savages, not pretend ones. He should watch out.

But I still respect him, I think [he] just a little over sold us, and I don’t think he wanted to be mean,” Riddle said. “I just think he thought his time was tougher and I would say this: when he worked times weren’t tougher. They weren’t smart either. They were dumber. They abused certain things, they abused their bodies and they are all paying the price for it. Today’s wrestlers are smarter, who work smarter. If they think they took more bumps, we don’t work the same schedule you were working and you can’t say we are softer for that. We’re more smarter and educated like the modern day athlete and we are not getting hurt that much.

We’re training smart, we eat healthier and we do things better because people in the past made so many mistakes that we learned from them. Now we don’t make those same mistakes anymore. So Undertaker saying we are soft, I don’t think we are soft. I think we are more intelligent, so we don’t get hurt and don’t put ourselves in stupid situations like bringing guns to work. So Undertaker, nothing but respect but at the end of the day. Respect and understand evolution. Realize we have evolved, we are better educated, and we don’t do certain things anymore. We do things right.”