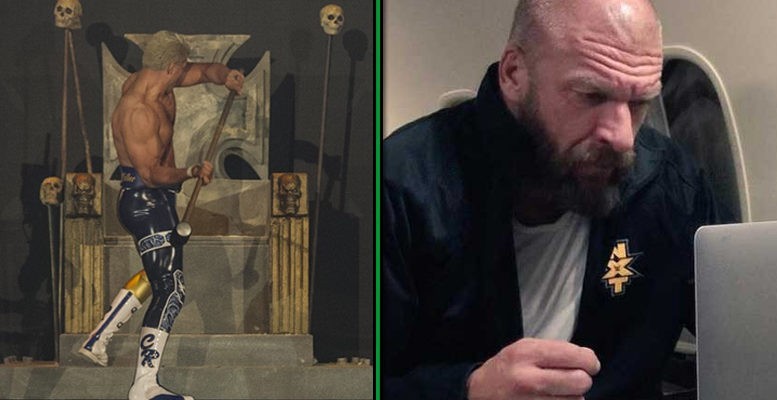 For the foreseeable future, it does seem WWE will be pitted against AEW against one another, at least in the eyes of fans who would like to see a rivalry or at least some competition.

That said, individuals on both sides are not doing much to dispel the idea. Only last Saturday, Cody Rhodes seemingly fired a shot at WWE and Triple H during his symbolic smashing of a throne entrance at Double or Nothing. He later denied he was taking a shot at The Game, but left it open to interpretation, especially for those fans that were running with it.

Fast forward to this past Monday night on Raw, Sami Zayn surprisingly name dropped AEW during a segment and whether it was scripted or not is still up for debate at this point.

On HHH taking jab at AEW on HOF and AEW firing back…notes at HOF there is an elephant in room with @RealBillyGunn there and that was a very DX thing to do. Says he’s focused on NXT Takeover quality& results and growth & not what anyone else is saying or what their creative is.

HHH is asked about both WWE/AEW taking jabs at each other and whether NXT could get in the mix. He says the HoF ceremony was a bit different and expected from DX. He says he’s focused on TakeOver this weekend. ^JN

When H is directly questioned about Rhodes’ throne smashing at Double or Nothing, he replies:

“For me, I don’t even think about it. I just want to put on the best product possible with this TakeOver. I’m focused on this Saturday’s TakeOver XXV and continuing to grow the brand.”

WWE is a global machine, the biggest wrestling promotion in the world. Period. Are AEW getting under their skin at all or do we think they don’t merit a second thought for the higher ups? We’d love to hear your thoughts…