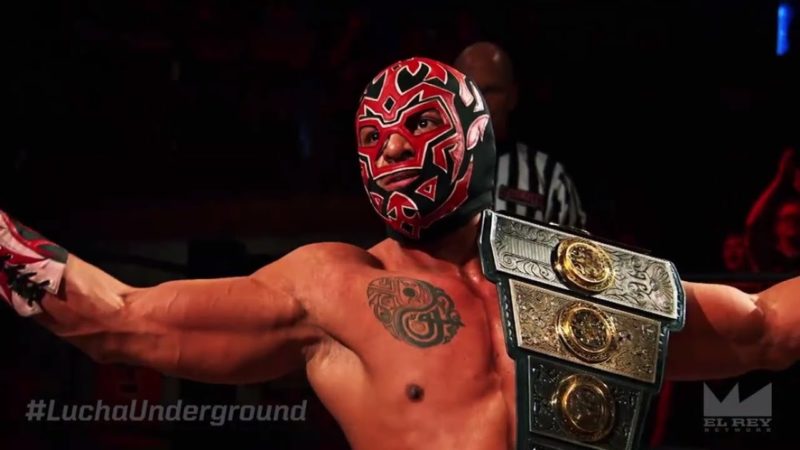 One of Lucha Underground’s top acts, King Cuerno, known outside the company as El Hijo del Fantasma, has decided to take action against the El Rey Network. According to Pro Wrestling Sheet, his lawyers filed documents against the network and Baba-G Productions.

Back in January, Ivelisse revealed on Twitter that she’d been trying to get Lucha Underground to release her for over a year. Joey Ryan backed her claims, stating that many Lucha Underground talents who opted to stick around with the company were “seemingly punished” for deciding to stick around before season 4 tapings began. While the company has allowed certain stars to work with other promotions, like the Lucha Bros, Sami Callihan, Taya Valkyrie, Brian Cage, Johnny Mundo and more who work with Impact Wrestling, the majority of their roster has seemingly been forced to sit on the sidelines, working for smaller indie organizations and hoping for a Season 5.

Cuerno’s lawyers stated that the contracts Lucha Underground, LLC offered their talent contained “restrictions that prohibited the professional wrestlers from engaging in their lawful profession.” The argument stems from how the world of wrestling has changed for the good in the past five years, making it easier for competitors to make a living.

The lawyers cited the WWE, Ring of Honor, All Elite Wrestling, and Impact Wrestling as legitimate options that would give any talents stuck with Lucha Underground a chance to work in front of bigger audiences and earn better paychecks. It was stated that the contracts offered now were nowhere near as lucrative as they used to be back when Lucha Underground appeared in 2014.

The documents then detailed how little Lucha Underground wrestlers make per season, stating that it’s less than $1000 per episode.

By contrast, Lucha Underground broadcasts between 22 and 40 television episodes per year, with no live events like the other described wrestling promotions. If a wrestler appears on a show, it is usually just a couple. The payment per episode is usually less than $1,000.

Cuerno’s lawyers have also stated that there’s another lawsuit at the firm filed as “a class action to invalidate certain portions of their contracts that we believe are illegal,” and include Joey Ryan, Ivelisse, and Kobra Moon, among others.

Cuerno has claimed that he’s lost out on thousands, along with a lucrative deal from another company due to his contract with Lucha Underground, and believes El Rey and Baba-G owe him for putative and actual damages.